10 Ways to Make A Micro-Budget Movie 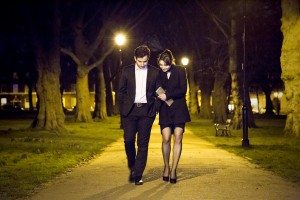 I’m one of the 50 Kisses writers (Advice) and I’m in the middle of production of my feature debut (as co-writer/director/producer), a micro-budget comedy called ‘Kidnap Me’.

It’s an edgy black comedy of love, sex and mistaken identity, in which a kinky couple book a roleplay kidnap experience, only to get nabbed by a pair of dim-witted gangsters.

The film’s been four years in development, scripting and production, during which time I’ve been through the Guerilla Filmmakers Masterclass, Producer’s Masterclass, Cannes Film Festival, How to Fund a Film and the London Screenwriters’ Festival, set up a production company and produced a ton of shorts, music vids and corporate.

I thought I’d share what we’d learnt from all of those and this project in particular.

1. Wait til you’re ready.
I first wanted to make this film in 2010 when we had the bare bones of the idea. I’d come out of the GFM with a fire in my belly and access to a Z1, and we made a little ‘proof-of-concept’ teaser with a couple of friends and thought we’d bash it out of the park. Six months later I was staring at a script that didn’t have an ending. We couldn’t get it to work. We weren’t ready. Fast-forward four years and we’ve a script that everyone loves, that’s funny and emotional and resonant, a cast that do it wonders, and a crew we’ve built up over the last two years of music videos, corporates and shorts that work like gangbusters together. Now, we’re ready.

2. Do your research.
We went to Cannes in 2013. Nothing to sell, purely as an R&D exercise, and it was invaluable. We went there with a number of projects – a mid-budget thriller, a period drama and Kidnap Me – our silly sexy comedy. In amongst the Great Gatsby and Inside Llewyn Davies, was ‘Sharknado’, ‘Crawl Bitch Crawl’, and ‘Half Zombie, Half Demon, All Zemon’. We met and chatted to numerous distributors and sales agents – just walked up to them and said hello – and we learnt a few things: Genre sells, drama doesn’t; people are bored of zombie flicks; at the mid-budget level, someone’ll take a chance on a debut writer-director, but not a debut producer. And finally, if you’ve got a film you can make for £20k, just go and bloody make it already. 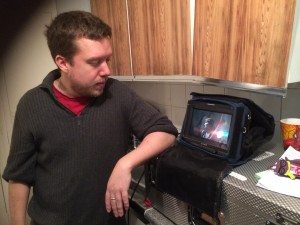 3. Cast bespoke.
We knew that Kidnap Me would live or die on the chemistry of its leads. With that in mind, we cast people we’d seen together. Ross F Sutherland and Ray Whelan we’d worked with on a short film and their chemistry was amazing – a classic double act. I spent three months going to every comedy fringe theatre performance I could, and at one showcase I saw Dan Curshen and Genna Foden. There they were – my characters, in front of me. I approached them after that, and after a collaborative process, they came on board. Which brings me onto…

4. Re-write for your cast.
We had a version of the script we’d worked on for three years, but it was only when our leads came on board that it really began to sing. We’ve effectively re-written the characters for those actors, and it’s been an incredible process of collaboration. On a micro-budget level, having a cast who’re invested in the project from the scripting stage, means they’re far more willing to go the extra mile with you as the money trickles in slowly. 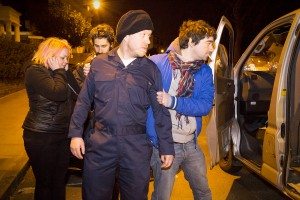 5. Shoot in blocks.
You don’t have to film it all in one go! A lesson from Following, this, which was shot piecemeal over the course of a year. And in Eraserhead there’s a scene of a guy walking through a door, which was shot some seven YEARS apart. Our plan was to shoot the cheap bit first – the four guys in a room bit – and use that to raise the finance to shoot the rest. Hair & make-up can do wonders in getting your cast looking like they did six months ago, and it’s much easier to get people to take a few days off their day jobs than commit for three solid weeks.

6. This is our breakout movie, not our money-making movie.
This is our calling card film. For us as writer-director-producers, if we can make a profit, even if it’s only a pound, we’ll be laughing. It’s not about the money on this one. So we’ve done something quite unique – we’ve allocated shares in lieu of payment. Our cast & crew aren’t working for free, or expenses only, they’re working for a co-operative. They each own a portion of Kidnap Me Ltd (yes, that’s the name of the company), determined by the time they’ve each spent on the project. So if the company makes money, they will see some of that. From the lead actor to the runner, everyone’s invested in the movie for the same amount, fairly and equally. It’s not my movie, it’s OUR movie.

7. You can get an amazing crew by giving them the opportunity to step-up.
We’ve hand-picked our crew from the shorts, commercials and music videos we’ve worked on over the last few years. For most, this is their first feature in the role (a few, like our costume designer Gabriella, sound recordist Lois and production designer Keith, are highly experienced, and we’re oh-so-lucky to have them), and for the chance to step-up and for it to be their breakout movie too, they’ve said yes to no money.

8. Be SEIS ready.
We have advance assurance from HMRC. We have our bank account. We have our SPV. We may not actually know any rich people, and we may end up crowdfunding the lot, but we’re ready to go the SEIS route, and it hasn’t cost us a penny. At the very least we’ll be able to claim the UK tax credit for 20%.

9. Never, ever compromise on safety.
Even if it’s micro-budget, there are some things you just don’t scrimp on. Our movie climaxes with a kick-ass comedy fight sequence involving machetes, baby dolls, wellington boots and stilettos. We’ve paid precisely one person a fee on this production, and that’s the fight co-ordinator. You do not want to attempt these things on your own! Tidd James has worked on numerous things like Game of Thrones, Merlin and Being Human, and he did wonders for us. 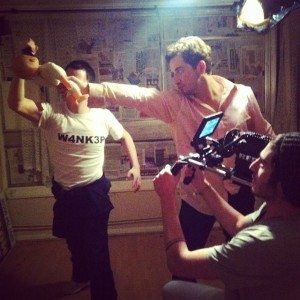 10. Even micro-budget films have a budget.
We’ve squeezed every aspect we possibly could – written for the locations, props and costumes that we had available to us, rewrote for our cast, set up a co-operative and scheduled in blocks, but ultimately it still all costs money. We’ve spent £10k of our own money so far, and we’ve shot 2/3 of the movie. We need about another £15k to shoot the rest, and yes, we’re crowdfunding!

If you’ve gotten anything out of this, our campaign launches on Friday March 28th.
https://vimeo.com/89859317

About us: Ross Aitken is one of the writers of 50 Kisses (Advice) and together with co-writer/director/producer James Browning run Ikonic Films – www.ikonicfilms.co.uk.

Kidnap Me is their first feature.

10 Ways to Make A Micro-Budget Movie