When we last visited with Tokyo-based Kadinche, the creators of Panoplaza, they gave us a glimpse of their 360-degree video recording tool, employing a clever six-camera GoPro cubic mount recorder. Recently the company has officially announced a new video solution, cleverly dubbed ‘Panomovie’, making it available to their clients in addition to their other panoramic photography offerings. 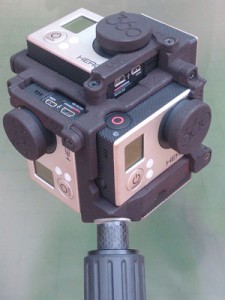 Using their GoPro solution, they can record video from either a static or moving viewpoint (the latter is obviously more fun!), with cameras recording six different views from that position. And then by using their own photo stitching software (you can opt for commercial software as well), they can then combine all six camera views to create a complete 360-degree video view. You can preview some examples of how it looks in the video below.

That video can subsequently be viewed using a variety of devices, including PC and smartphones, or even on a head-mounted display like Oculus Rift, able to control the directional view with ease.

So what are the possible applications for such a technology? Kadinche lists potential clients as amusement facilities, sightseeing spots, real estates, retails, concerts, and sports.

I asked Kadinche CEO Soko Aoki if he had any plans to integrate Leap Motion as a possible controller for exploring panoramic photos. He affirms that they have tested Leap Motion as a means of controlling their panoramas, and are searching for clients who might take advantage of such a gesture interface to panoramic contents.