Not every newsroom has the financial strength to launch and maintain a video production team and to manage even a video channel on its own. But video has grown in importance significantly the last couple of years. Now Wochit (say “Watch it”) has entered the international market to democratise video production with its text-to-video technology and an compelling offer. Users can access content from trusted sources and big names in the industry like AP, AFP, Reuters, and Getty Images without the hassle of individual license deals to produce quality videos even in less than 10 minutes. 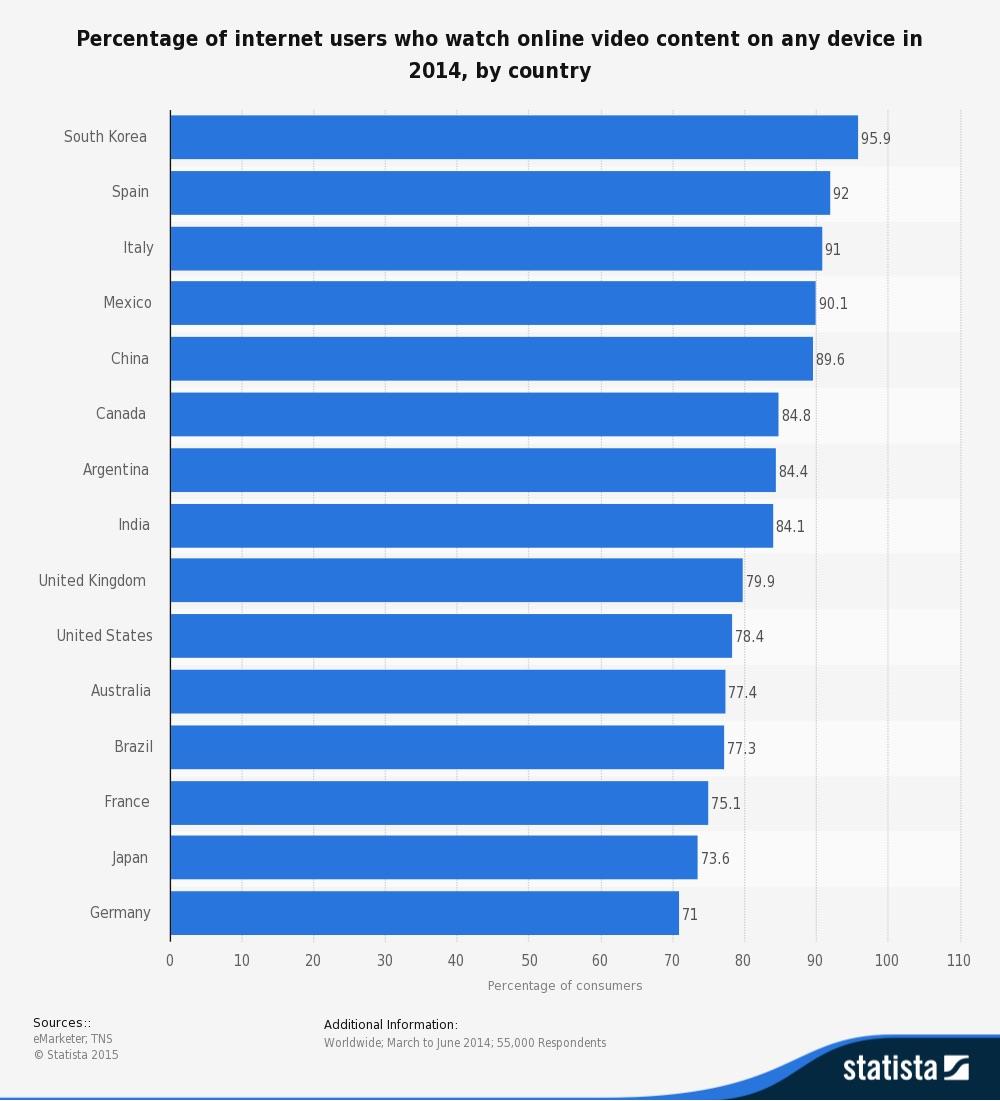 Video has become one of the emerging trends in newsrooms globally despite the challenge of making video initiatives profitable. To say it in the words of Douglas Grant in a piece published by WAN-IFRA, video has become a main part in news organisations business strategy “because they now act as the ‘point of entry’ for many readers and viewers”.

Video content faces high demand. 78.4 per cent of US. Internet users watch videos online, 79.9 per cent in the UK and even more than 90 per cent in countries like South Korea (95.9 per cent), Spain (92 per cent), and Italy (91 per cent). Analysts go as far to say, that online video is a billion-dollar opportunity. To put it into context and to give you a comparison: the growth power in online video is much bigger than in digital music (see chart below). 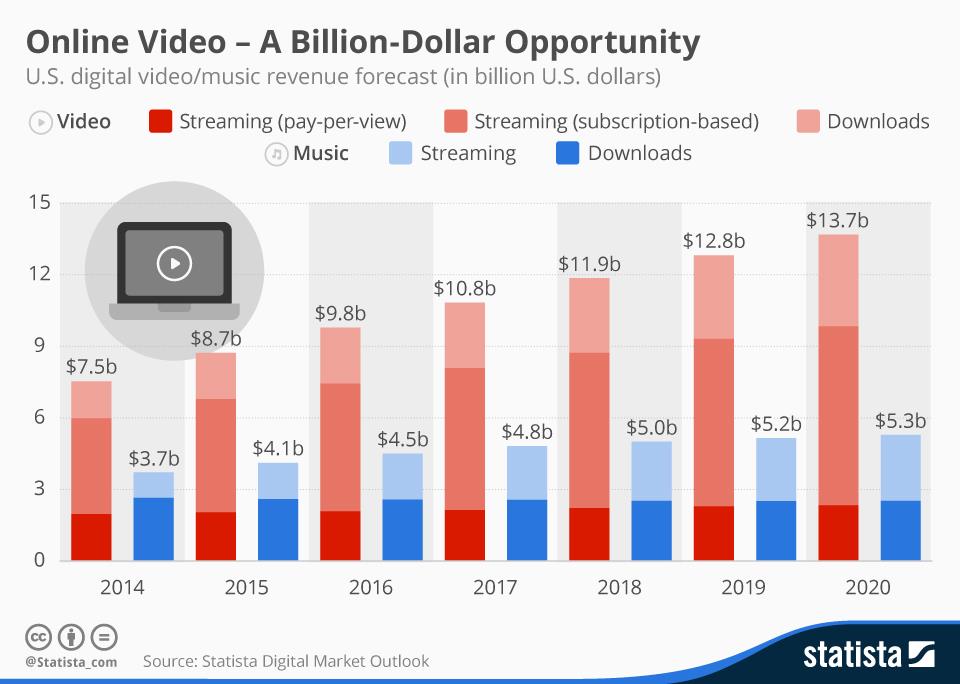 Headquartered in New York, Wochit has been founded in 2012 by Dror Ginzberg and Ran Oz, two Israeli serial entrepreneurs. The startup was able to win Redpoint, Greycroft, Cedar Fund and Marker LLC as investors and closed a US$11m investment round in May 2014 successfully. During its 3 years of existence, the startup won high profile customers like USA Today, Axel Springer, Deutsche Welle, Bauer Media, SPIEGEL Online, and AOL to name just a few.

The company targets journalists, bloggers, storytellers, and publishers who benefit from Wochit’s cloud-based productivity environment and its access to stock footage without the need of individual license agreements. It’s in the hands of the user to decide if they like to use stock footage or turn to own original content, which can be uploaded via its web interface. 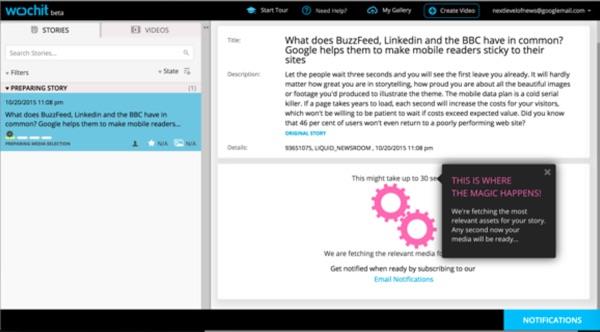 Above: Screenshot of Wochit’s interface, which shows the processing of a text article to match it with relevant video content from its licensed partners

Once a user has logged into the system, she can select text as a starting point for an audiovisual story. ‘Text’ enables a user to submit an URL to the system, which starts to review it shortly afterwards. Wochit’s natural language search function analyzes the submitted article and extracts locations, people, and events and their relationship. Once the platform has understood the context of an article it starts to suggest visual content. The user decides which footage might become part of the final story and edits it in the web interface. For the audio users can either use their own recorded voice or rely on voice-over talent for Spanish, English or a French version. 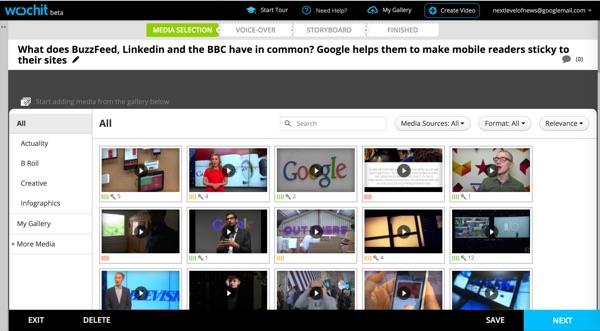 Above: Wochit’s text-to-video technology suggests footage based on natural language analysis of text.

While the software automates a lot of process tasks common for such environments, robot journalism is not what Wochit aims for. “We focus on creativity, which can’t be automated,” says Christoph Pleitgen, SVP, Sales & Business Development for EMEA and APAC and former managing director of the Reuters News Agency at Thomson Reuters. The startups text-to-video technology and ease of use sets it apart from competitors and allows users to create videos within minutes. Speed is one of the key factors for its clients, which also save time and money not having to close individual license deals with each of the well-known content sources Wochit partners with. The software is an opportunity for individual journalists as well, who want to enrich their blog entries with video content and small publishers who decided to use it in order to make their foray into the video business while keeping investments low. Clients like Burda show that it is also not only a platform for news organizations but for magazine publishers