Why online video is the future of content marketing

Video is taking content marketing by storm, but you’ll have to do more than just make one to realise its full potential 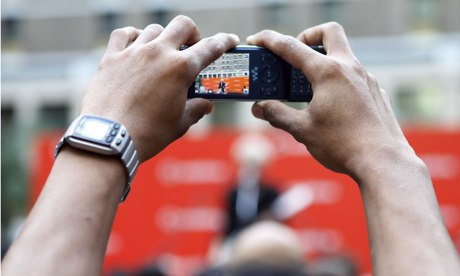 Video is everywhere. Small businesses who ignore it ‘do so at their peril’.  Photograph: Robert Gray/Getty Images

If it were five years in the future, would you be reading this article or would you be watching it? As online video continues its inimitable rise, it’s an interesting question to ponder.

By 2017, video will account for 69% of all consumer internet traffic, according to Cisco. Video-on-demand traffic alone will have almost trebled. Leafing through a swathe of statistics on the subject, I’m hard pressed to find any indicator that doesn’t suggest rapid growth.

With online video quickly becoming a key means for people to satisfy their information and entertainment needs, small businesses that fail to include it in their internet marketing strategies will do so at their peril.

Video is the future of content marketing. That is, if it’s not the here and now. Various studies show more than half of companies are already making use of the medium – a figure that’s predicted to rise as more and more realise the possibilities. Nielsen claims 64% of marketers expect video to dominate their strategies in the near future. It’s not difficult to see why.

When it comes to potential reach, video is peerless. YouTube receives more than one billion unique visitors every month – that’s more than any other channel, apart from Facebook. One in three Britons view at least one online video a week – that’s a weekly audience of more than 20 million people in the UK alone. Video can give you access to all this. Video done well can give you a slice of it. What other form of content can do the same?

The success stories of videos that have gone viral are legend. A recent campaign from Volkswagen, for example, saw a trio of its videos viewed a combined 155 million times. If such numbers seem out of reach for companies without 12-figure revenue streams, they at least demonstrate video’s inherent shareability. Engage viewers and they will share the video with others. They will spend longer on your website and more time interacting with your brand. For any social media campaign, any SEO exercise, video is without doubt one of the best tools in the kit.

It is naturally engaging and, in an age of information overload, it’s vital for small businesses to offer content that is easy to digest; if not, consumers will simply move on. Video does this very well. If a picture paints 1,000 words then one minute of video is worth 1.8 million, so say Forrester’s researchers. Little wonder then that Axonn Research found seven in 10 people view brands in a more positive light after watching interesting video content from them.

But is video really possible for small businesses? Absolutely. Production costs have fallen significantly in recent years and you no longer need to be a technical whiz to work out how to use it. Apps such as Twitter’s Vine, with its six-second maximum clip length, have dramatically increased the opportunity for businesses on a limited budget to get stuck in. Nevertheless, if you’re to realise a decent return on your investment, you will need to bear the following in mind.

Always consider the audience you are trying to reach and ensure the video is relevant to them. If it’s not the most appropriate means of getting your message across, you are probably wasting your time.

Do not neglect social media and be sure to promote across multiple channels. If you want to fully realise video’s potential, you must make it easy for users to find and share it. Don’t neglect mobile either. Ooyala has claimed a tenth of all video plays happen on mobiles and tablets, and it’s an increasingly important segment, with mobile phones holding 41% more share of video consumption at the end of June 2013 than at the start of that year.

This is the future of Television. Or is it? →
← Most popular film and TV content now available digitally, says KPMG