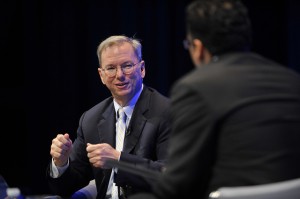 YouTube recently passed the milestone of one billion unique visitors a month with Schmidt claiming a figure of 6 or 7 billion was more than possible.

“It’s not a replacement for something that we know,” said Schmidt in an advertiser presentation in Silicon Valley. “It’s a new thing that we have to think about, to program, to curate and build new platforms.”

Schmidt: TV is so over