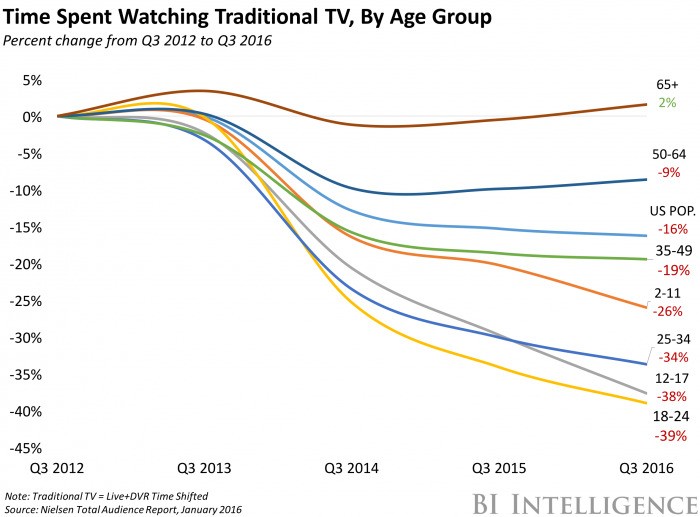 Traditional TV viewership continues to fall among every major demographic between the ages of 2 and 49, according to Nielsen’s Q3 2016 Total Audience Report.

Teenagers (12-17) are showing the largest decline, with viewership falling 11% year-over-year (YoY) in Q3 2016, as the age group increasingly transfers their media time from the TV screen to mobile devices on apps such as Snapchat and Instagram. But while time spent viewing traditional TV is decreasing, total time spent with all media reached a new high in Q3, increasing 13% YoY to just over 10.5 hours of media content per day among US adults.

However, it’s important to note that traditional TV still makes up 43% of total media time, according to the report, and marketers can take advantage of that through cross-platform campaigns. UK-based research firm IPA found that by utilizing both online video and traditional TV campaigns, marketers can increase their ad effectiveness by 54%. When online video is used on its own, the increase falls to 25%. Meanwhile, this early success is leading to increased cross-platform ad budgets — a third of US video ad spend is estimated to have gone to cross-platform video buys in 2016, which is a 21% increase from 2014, according to the IAB. The same study found that 62% of advertisers planned to increase their cross-platform spend in 2016 vs. 2015.